St Mary’s church is sign posted, as an Historic Church, on the A2 London Road, Ospringe. (Post Code ME13 0TH, OS Ref TQ 99240 63140). The road is almost opposite the junction for Doddington and is next to Faversham Stone Chapel.

It is just under 2 miles (3km) from the A2 at the end of a windy country lane, please take care, and is situated at the end of the lane within a working farmstead. You can park next to the church.

St Mary’s church stands on a promontory of land, which formerly provided wharves off the River Swale, now some way to the north. The place name, Luddenham, gets it origin from the Saxon `Lud` meaning a river.

The church dates from the Norman period in the 12th century, with the chancel being added a century later. In 1807 the tower was rebuilt and restoration of the church was carried out in 1881-84, with the porch being completed in 1886.

The church is originally open to visitors, though currently closed until further notice. 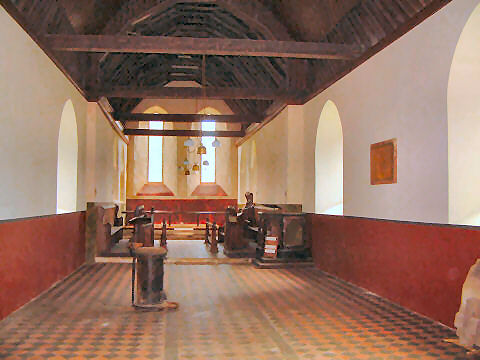 St Mary’s is constructed from flint and the walls contain Roman tiles, the church roofs are tiled. The tower built from flint at the bottom part and the restored top part is of brick, and its quoins (corner bricks) are also re-used Roman tiles. The windows date from 14th and 19th centuries, and the Norman west door has a zigzag decoration.

There are some medieval tiles in the sanctuary, where graffiti on the glass records those who were probably too poor to have permanent memorials outside. At the back of the church is a fragment of thirteenth century coffin lid brought here from the ruined Stone Chapel, which has a heart clasped by two hands in its crisp carving.

There is a War Memorial mounted on the right side wall, to the farm employees and men of the parish who were killed in the Great War.

The Heritage Hub has an inter-active display, which has a life story of each of the men’s lives.

In the churchyard are three structures designated as Grade II listed buildings. To the north of the chancel is a monument dating from the early 19th century. Its inscriptions are illegible. North west of the church is a chest tomb, also dating from the 19th century with illegible inscriptions. Southwest of the church is a pair of headstones dated 1745 and 1747. They are carved with heads, skulls and a bible, in a heart-shaped surround.

There is also a CWGC War Grave to Stoker 1st Class Harold Lewis Willis, who died on 23rd November 1944 from an illness contracted whilst on Atlantic Convoys.