On display in The Heritage Hub.

Six metres wide and two metres deep.
One thousand one hundred and forty-nine names.
One hundred and twenty-nine volunteers.
Six years of research – longer than the war itself.

HRGS applied to Swale Borough Council for grants to help with research costs, like subscriptions to online research sites. It soon became clear that results of the research was enabling us to provide biographies, often with photographs and documents, for the men on the memorials. A grant from the National Lottery Heritage Fund was obtained, which allowed us to purchase an interactive digital screen, to make the stories of the men available to members of the public.

Not all of the men on local memorials have been identified – those where there was just a surname and initials being the most difficult (although they were included on our digital Roll of Honour with ‘We remember him, as did those who loved him’). A decision was made to only include biographies, where we had been able to confirm a link to the town or village where they were remembered. This was often far from easy – in spite of what many think, people moved around a great deal in the past. This is why, on the Wall of Reflection, some may be shown with more than one parish – they could be remembered on one memorial, but have been born or lived in another place.

One such example is John Thomas BASEDEN, shown above. He was born in Lower Halstow in 1895, but by 1911 was living with his family at East Hall, Murston, where he was working as an agricultural labourer. He is remembered on the Murston memorial, and also on the Milton Town memorial – so by the time he enlisted in Sittingbourne he may have been living in Milton. He is not remembered on the Lower Halstow memorial as he no longer had any family living there.

The image above shows Richard Albert KEMSLEY was, according to census records, born in Sittingbourne, and the report into his death in the East Kent Gazette said that he had worked at the Sittingbourne Paper Mill and sang in the choir at Holy Trinity Church, Sittingbourne. However he was recorded on the Milton Town memorial, as he was living at 98 William Street, which was in Milton. At the time of the war, Sittingbourne and Milton were two separate towns, and streets which are now considered to be in Sittingbourne were then in Milton.

Also, Albert Edward KIMMINS was from Sittingbourne, but he is not remembered there, or on any other local memorial, as he had emigrated to Canada before the war and served in their forces. Many local men remembered on the Wall of Reflection had emigrated, and served in Canadian or Australian armies.

Although the project started out with the aim of finding out about men on the local memorials, in fact nearly a third of those found are not recorded on any local memorial. It was decided to include all of those who had been born, lived, worked, died or had family/loved ones who lived in the area.

The image above details the following individuals.

Thomas PURCELL was in the Royal Dublin Fusiliers, who were billeted in Sittingbourne during the early years of the war. He died in the Holy Trinity Hospital, and was buried with full military honours in Sittingbourne Cemetery.

Another man to be buried there was Harry Leonard PRIOR, one of the few men from the area to serve in the air force.

There is just one woman recorded on the Wall of Reflection – Alice POST who worked in the Faversham gunpowder factory and died of TNT poisoning.

There the stories of all of those remembered, as well as others from the Sheppey and Faversham areas can be seen on the Digital Roll of Honour. Many of the biographies of men from the Sittingbourne area include photographs of them.
One of the greatest delights for those engaged in the project has been making contact with relatives of the men who died; some of whom now live in Australia, New Zealand, Canada and America.
Often they provide extra personal details, but sometimes the work our researchers have done provides them with new information about their family’s history. It is always very special when someone comes in to the Heritage Hub, and finds their relative on our Digital Roll of Honour. 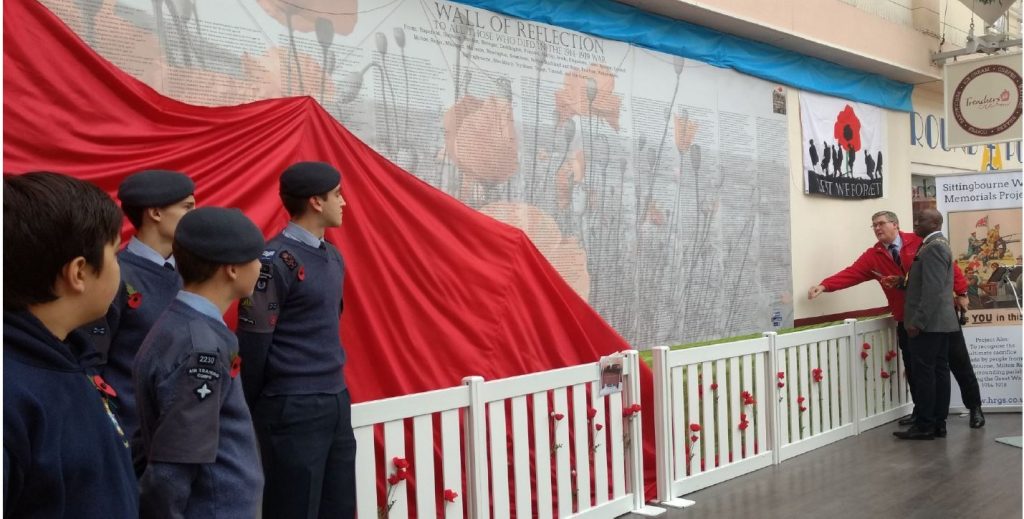 On Sunday 4th November Paul Auston, Deputy Lieutenant of Kent and President of HRGS; the Mayor, Councillor Samuel Koffie-Williams, and the Mayoress of Swale; HRGS Patron Sir Anthony Cleaver, and Lady Cleaver; members of Swale Borough Council; the Chaplain of the Royal British Legion Pat Tatchell; Air Cadets; members of The Royal West Kent Re-enactment group; relatives of those who were remembered on the wall; Sittingbourne War Memorials Project researchers; HRGS members; the Manager and staff of the Forum; as well as the general public, gathered in the atrium in The Forum, Sittingbourne, for the unveiling of the Wall of Reflection.

Our chairman, Richard Emmett, welcomed everyone and spoke about the project, and what it had achieved. He made reference to the re-enactors in their WW1 uniforms – who gave a visual link to those who had lived in the area and gave their lives in the war. He welcomed those who were there; and then introduced Paul Auston and Sir Anthony Cleaver, who both said a few words about the importance of the project. The Mayor of Swale also spoke, before unveiling the Wall of Reflection. Pat Tatchell gave a blessing; and Paul Auston laid a wreath.

The ceremony closed with the reading, by Pat Robinson, of a poem which had been written in memory of one of our local men who died during the war.

It was a very moving occasion, one which those who were there will never forget. 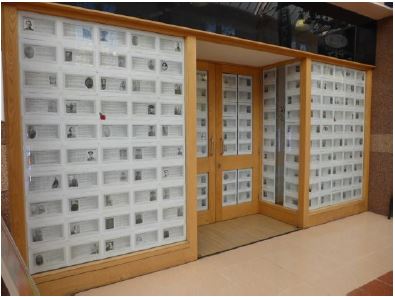 Afterwards relatives were photographed with the wall; many went to look at the windows in The Forum which had photos of men who had died (see picture), and visited the Heritage Hub.