June the 29th 2019 was a momentous day, when the local community all came together to participate in, and witness a unique event. This was a WW1 Peace Day celebration within the Armed Forces Day parade, which coincided with the hottest day of the year, so far. Although the fighting ceased on 11th November 1918, the First World War did not officially end until the Peace Treaty was signed at Versailles, on 28th June 1919. The following month the whole country celebrated ‘Peace Day’. 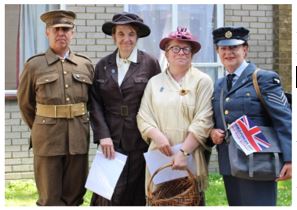 Our mission is to ‘bring history alive’. It was with that in mind that we started the War Memorials Project over seven years ago. We wanted to bring to life those whose names are remembered on local memorials, by telling their stories. A team of over 140 dedicated volunteers have researched over three thousand men and women from the Swale area, including of course the 1162 from Sittingbourne and the surrounding parishes whose names were displayed on the 36 banners, carried on Saturday.

With temperatures reaching 29oC (84 oF), those taking part in the parade (many in costumes) gathered in the churchyard of St Michael’s, before proceeding at 11am up the High Street to Central Avenue. All those who registered to participate, just short of 200, received a commemorative WW1 Peace Day medal lapel badge, a replica of the original medal given in 1919, which had been specially commissioned by HRGS. 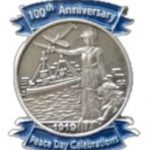 The WW1 parade followed the band of the Sheppey Sea Cadets and members of the Reserve Armed Forces, Royal British Legion, Veterans, Sittingbourne and Sheppey Cadets, Scouts, Guides and Brownies. 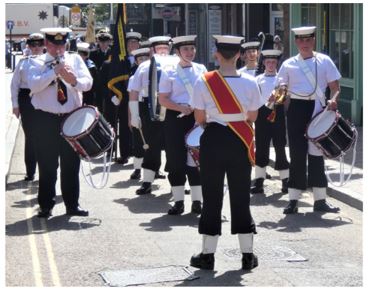 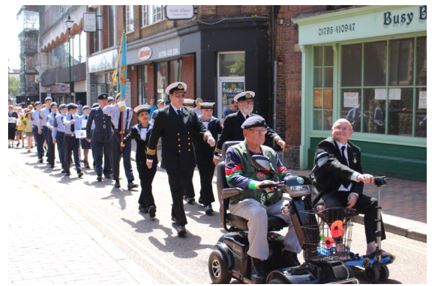 The first of the 36 WW1 banners was carried by Father Kevin Jacobs, Chaplain to the Royal Air Force – Air Cadets, and the Benefice of Tunstall and Bredgar churches, together with the Deputy Mayor of Swale, Councillor Roger Clark.

This banner displayed pictures of the processions held by local people one hundred years ago, and carried the message ‘Celebrating the Centenary of the Festivals and Parades held on Peace Day 1919. We give thanks to all of those from Sittingbourne and surrounding villages, who played their part in bringing about victory and peace; and remember those who gave their lives.’ 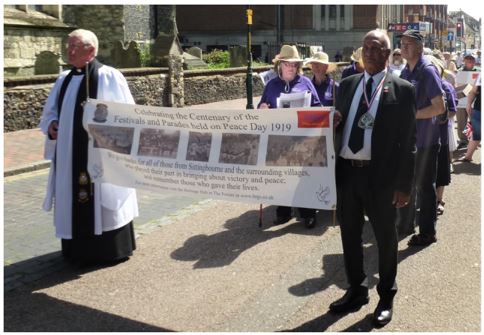 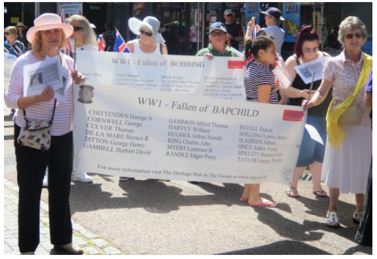 The other 35 banners had the names of those with a local connection, who died during the First World War, including the youngest, Alec Grigg, aged 14, the oldest Major Joshua Fielding, aged 76, and the only female, Alice Post, aged 21. They were – Bapchild (carried by Margaret Edwards and Valerie Smith), Bobbing (carried by Allan Mercer and Lara Apps), Borden (carried by Samantha Mann and family), Bredgar (carried by Ray and Judy Huntley), Doddington (carried by Ken and Jane Seyler), Frinsted (carried by Malcom and Rita Major), Hartlip (carried by Marion Ralph and family), 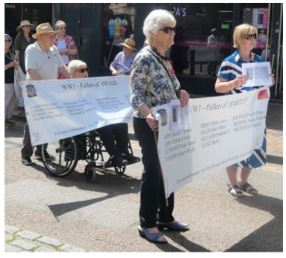 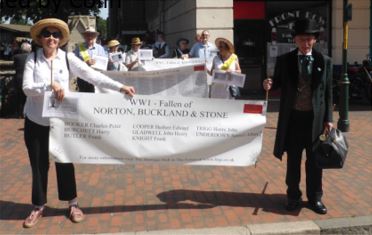 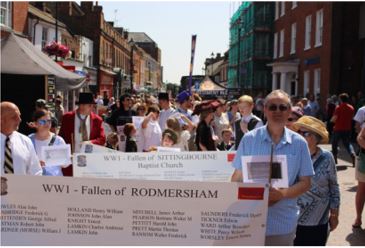 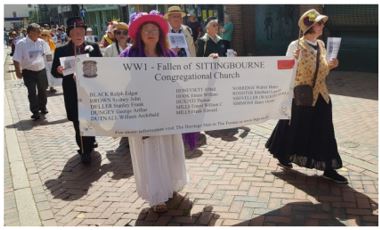 Others taking part carried a photograph of a relative who had died, or of one who had served and survived. There were also people, including whole families, dressed in historical costumes, just as the local people did in the original parade. 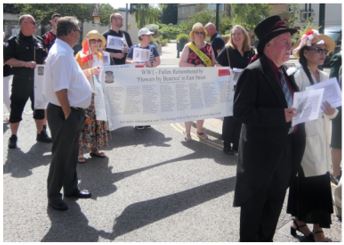 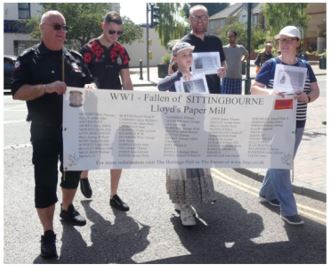 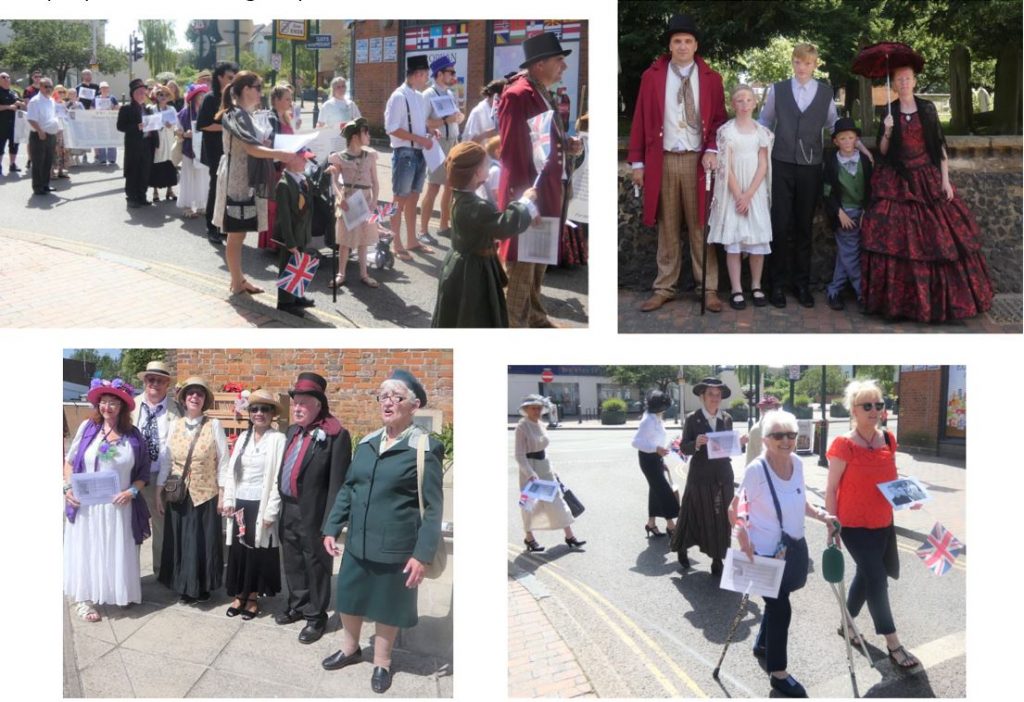 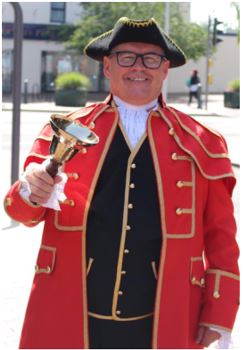 The procession was headed by the Sittingbourne Town Crier, Richard Spooner, with the distinctive tone and volume of a town crier, dressed in his traditional red and gold tunic. At the junction with Central Avenue the Parade was greeted by local dignitaries, including the Mayor of Swale – Councillor Ken Ingleton, Gordon Henderson MP, and Miss Sittingbourne – Charlotte Jordan. The Town Crier introduced the Mayor of Swale, who officially opened the Armed Forces Day event, which was taking place in the High Street over the rest of the day.

The WW1 procession then made its way to the War Memorial, where a Fire Engine was stationed – another link with the past, as the Sittingbourne Fire Brigade had been involved in 1919.

At the War Memorial – Richard Emmett, Chair of HRGS, thanked everyone for attending and for participating in the day, with all their costumes and flags, and then introduced Father Kevin Jacobs. After a short address by Father Kevin, who blessed the banners, he asked that they be taken back to their respective churches as a reminder of what sacrifice had been made and as a symbol of peace for the future.

The gathered crowd was led in song by members of ‘Swale Sings’, and joined in with rousing renditions of popular tunes from WW1. Starting with ‘It’s a Long Way to Tipperary’, which soldiers commonly sang as they left for war; then ‘Pack Up Your Troubles In Your Old Kit Bag’, which the soldiers marched to; and finishing with ‘Rule Britannia’. The latter was sung with such pride and gusto to mark victory and peace then, as it was on this day too. 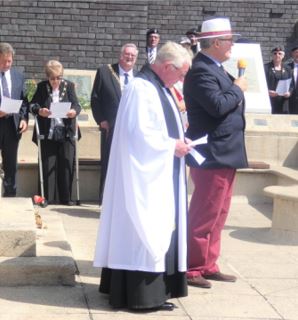 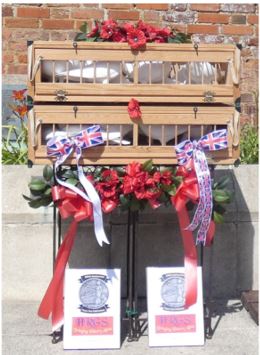 During the last rendition of ‘Rule Britannia’, the Deputy Mayor of Swale, Councellor Roger Clark assisted Geoff Preece of ‘The White Doves of Dover’, in releasing 25 white doves.

They were a beautiful symbol of peace – their stark white plumage against a brilliant blue sky, as they circled once, before heading home to Dover.

A spectacular display to cap off a well-attended parade which remembered those who gave so much. 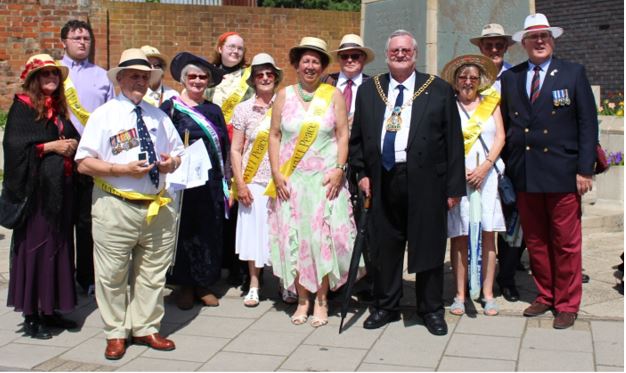 The Armed Forces event continued in the High Street over the rest of the day, and included a number of competitions. The event concluded with our President, Deputy Lieutenant Paul Auston Esq., taking the salute and presenting awards to the cadets.

The HRGS stall had a large variety of history books, including those published on WW1, the latest one being: ‘A Soldier’s War – The Autobiography of Private Charles Joseph Robinson’; and a 28 page Peace Day souvenir booklet based on the original East Kent Gazette Peace Day celebrations, with many of the stories from the local parish events from 1919 (price £1). These, together with the commemorative WW1 Peace Day Medal Lapel Badge (price £3), are now on sale in The Heritage Hub. 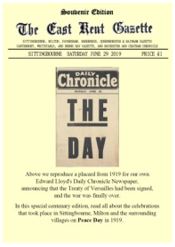 Much of the funding for the Peace Day Parade was thanks to Alan Amos, who had secured funding from Flowers by Beatrice, The Alma Public House, A & V Smith, and the Gamble, Hughes, Bournes and Nicholls families. Funding also came from The Somme Yomp’ lads, and via Richard Emmett, Jerry and Mary Cooley, who were instrumental in organising nine WW1 themed talks, that were held in 2017-2018 to raise funds. The original funding for these coming from Swale Borough Council.

Richard Emmett, the Chair of HRGS said “The parade had indeed succeeded in ‘bringing history alive’ to mark the centenary of the Peace Day Celebrations held in 1919, with so many of the local community in costumes and waving flags, as the local people did 100 years ago. I think we did our lads proud!”

Just a few of the many other comments on the event: ‘We wish to say thank you so much for organising a great parade last Saturday. It was an impressive procession and we hope you were pleased with it too. It was lovely to be able to honour the soldiers of the 1st World War and my grandfather.’ (Pascal and Kathy Johnson); ‘Congratulations and my thanks to you and the rest of HRGS for organising Saturday’s event. The logistics, effort and hard work that went into it were there to be seen and resulted in its success.’ (Richard Thompstone) and ‘To everyone who helped with today’s Peace Day celebration–the day was wonderful, the weather fantastic and everything went like clockwork –and most of all it was a moving, fitting tribute to all our brave ancestors who fought and lost their lives 100 years ago. I know how much hard work is needed to organise such an event–and we were both proud to play a small part in this today. I am sure you, yourselves, must all be very relieved and pleased of how the day went. Thank you again.’ (Lena and Keith Jordan).

There are more photos of the day in the Heritage Hub window and on our Facebook page.