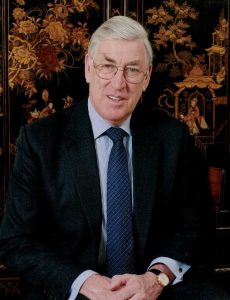 Sir Anthony kindly agreed to become the Patron of the Historical Research Group of Sittingbourne earlier this year.  We are delighted that he has accepted this new role within HRGS. In that role, he has offered to lend his support to our research areas and be a figurehead to the group.

Following National Service, Sir Anthony read Greats (Latin, Greek, Ancient History and Philosophy) at Trinity College, Oxford.  In 1962, he joined IBM as a trainee instructor, rising to be Chairman and Chief Executive of IBM (UK).  He then chaired a range of organisations including the UK Atomic Energy Authority, the Nuclear Decommissioning Authority and the Medical Research Council, various companies and Birkbeck College and the Royal College of Music.

As Chairman of Engineering UK, he became the driving force behind the founding of the country’s ‘Big Bang Fair’ which was first run in 2009 and by 2015 had become one of Europe’s largest science, engineering and technology fairs for young people.

Tony, as he likes to be known, retired from his role at Engineering UK in 2010 and as Patron of the Big Bang Fair a few years later.