On Tuesday 23rd April a touching service has been held by the grave of 14-year-old Alec Ernest Grigg, who lied about his age to fight in the First World War. A new CWGC headstone was installed for Swale’s youngest WW1 casulaty, which now included his age. 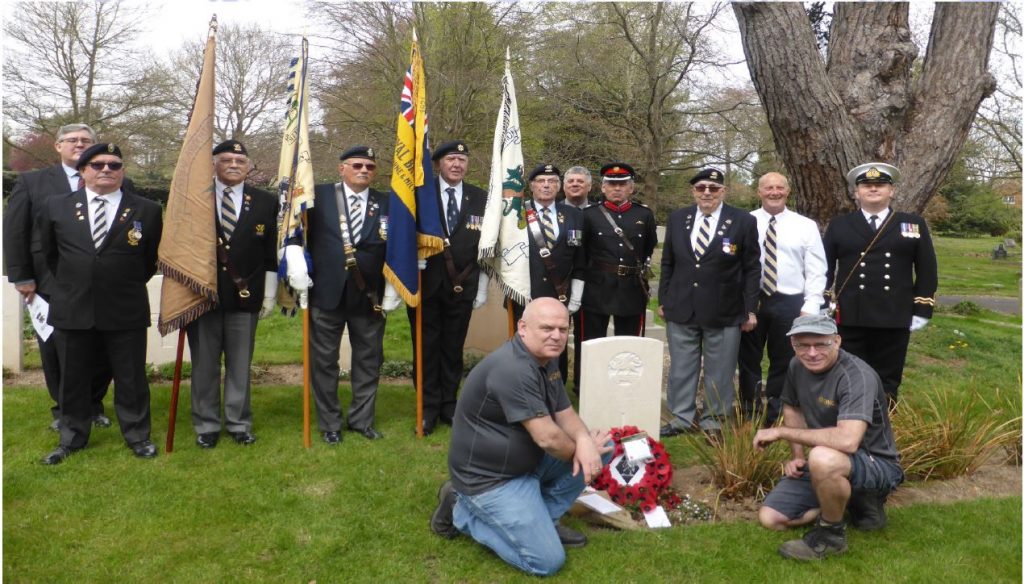 Newspaper records from 1912 show Alec was a proficient swimmer and represented his school, Milton Regis Council School, in the Boys Championships that year. Alec was ‘a well-developed boy for his age, standing 6 feet tall’ and might easily be taken as older.

Alec had worked at the Queenborough Chemical Works before he enlisted as a Private with the 3rd/4th Battalion, The Buffs, East Kent Regiment (having lied about his age) in September 1915. He stated he was 19 years old, which meant that he would be sent on operations, as the military rule at the time had set this as the minimum age for operations. He was training in Canterbury when he cut his third finger on his left hand, whilst pinning a badge on a friend’s uniform. He was first taken to the Military Hospital and then moved to the Canterbury Sanatorium. The injury led to tetanus and he died on 26th October 1915.

He was buried with full military honours in Canterbury Cemetery, with the band of 6th Dragoon Guards playing the funeral music and a firing party from his battalion in attendance, who fired three volleys over his grave. A large company of people attended, which included his immediate family, his aunt and uncle, William and Jane Grigg and their son Frank (1899-1969) who was a serving soldier at the time.

His age inspired Terry Matson, a local Milton historian and HRGS member, to find out more about him, and led to a quest to find two Milton Regis memorials, Milton County Schools (shown right) and St Paul’s Church, that Alec was named on, and to their repair and rededication in 2007 and 2011.

In October 2018, Stephen Palmer, an HRGS member and researcher, came across the story of Alec, and on checking the CWGC database discovered that it did not acknowledge his age. Within 24 hours of submitting a copy of his birth and death certificates the CWGC rectified this and updated their database. He is now one of 10 recorded 14 year olds in the army to have died in WW1.

In addition, Stephen saw that Alec’s headstone (below left) in Canterbury Cemetery did not include his age. He wrote to the CWGC to enquire if his age could be added. Their response was that there was no room to include his age. On reading this disappointing news the next line in their reply came as a big surprise. ‘A replacement headstone has been ordered 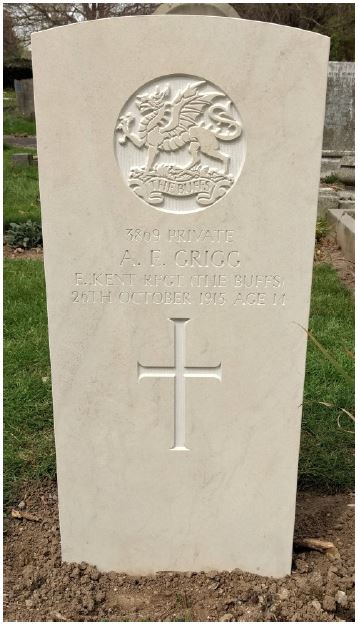 So, on Tuesday 23rd April his new headstone (above right) was installed in Canterbury Cemetery and now stands proud amongst those of fellow soldiers.

A dedication service was held which was led by Reverend Pat Tatchell, Royal British Legion Chaplain, Sittingbourne & Milton Regis. There were standard bearers and a bugler, and two wreaths were laid – by the Deputy Lieutenant of Kent, Paul Auston, and Richard Emmett. The dedication concluded with the standard bearers lowering their flags as the Last Post was played and a two minute silence was held. The ceremony was well attended with members of The Buffs, CWGC and HRGS, as well as local press and TV – a report of the event appeared that night on the BBC South East and KMTV news programmes.

The KMTV video can be seen here or on KMTV Facebook here.

It is hoped now that when people see Alec’s headstone that they stop and wonder what inspired a fourteen year old to enlist, and spend just a short time reflecting on the sacrifice that he was prepared to make, as in all probability he would have been sent into battle.

Alec may not have fought in any battles, he has not gone down in history for acts of bravery, he died because of a simple act of kindness and comradeship, and for that, We will Remember Him.