At the start of the war Sittingbourne and Milton were still separate towns, each with its own council and town hall and its own very distinctive character. Milton was the older of the two, having been a royal town and manor at the time of the Norman Conquest.

It had a Court Hall and was the administrative centre for the area known as Milton Hundred, which ran from Iwade in the north to Milstead in the south, and from Bapchild and Tonge in the east to Rainham in the west.

It was also a market centre, but more importantly, it was a fishing port. Wills from Tudor times show that local people often owned several boats, and that some of these would be used for dredging oysters from Milton Creek. The town had a number of mills, including a windmill and at least two watermills, one of which was Periwinkle Mill, and there was a tannery in Chalkwell Road. Miltonians were proud of their heritage and when the railway came in the early Victorian times they refused to have a station. 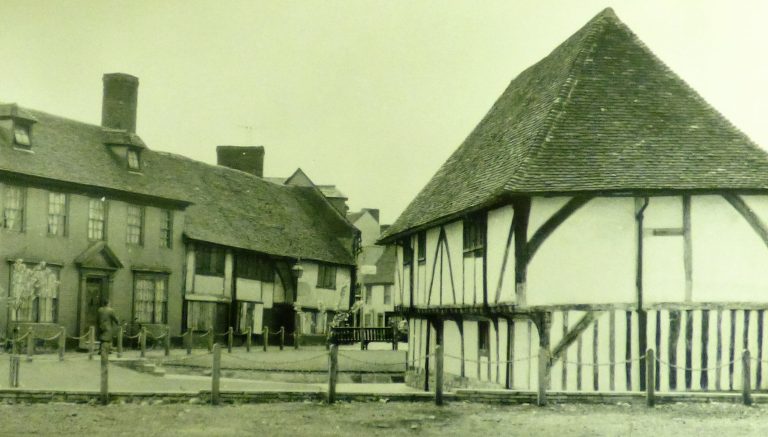 The number of well preserved buildings in Milton High Street, which often show no signs of having been modernised since being built, are a good indication that change was not something that was welcomed. The same cannot be said of Sittingbourne.

Sittingbourne High Street has a wider range of architectural styles, buildings were often  ’modernised’ or rebuilt, and to see what they were like you often have to look up, above the modern shop fronts. In the Middle Ages, the number of buildings along the London to Dover road increased, to provide accommodation for the pilgrims who needed somewhere to stay overnight, when they were on their way to and from Canterbury. This led to the parish and town of Sittingbourne being carved out of that of Milton.

It was not though a simple division, as in the west, much of the land to the south of the London to Dover road remained part of Milton, and as the number of roads increased in the 19th century, the boundary cut through them, sometimes even through individual houses. This has given problems to researchers, as houses in roads like Burley Road, Rock Road and Park Road (all to the south of London Road) are often referred to as being in Milton rather than in Sittingbourne. 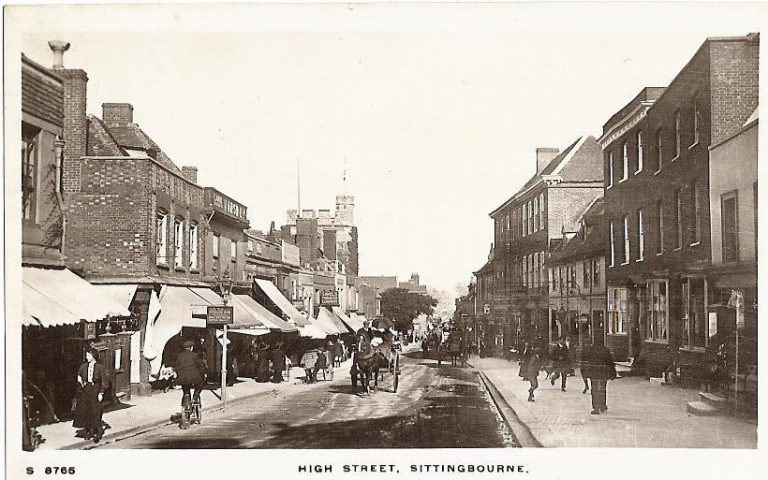 Sittingbourne, like Milton, was a market centre, the stalls would have been set up in the area where the road is at its widest, near the top of the hill coming up from St Michael’s Church. However, as the days of travel by coach, rather than by foot or on horseback, arrived, Sittingbourne became the only overnight resting place on the route between London and the coastal ports, and the market lost out to the needs of travellers. It wasn’t until later that the Sittingbourne Stock Market was established in the meadows behind the Bull Hotel. 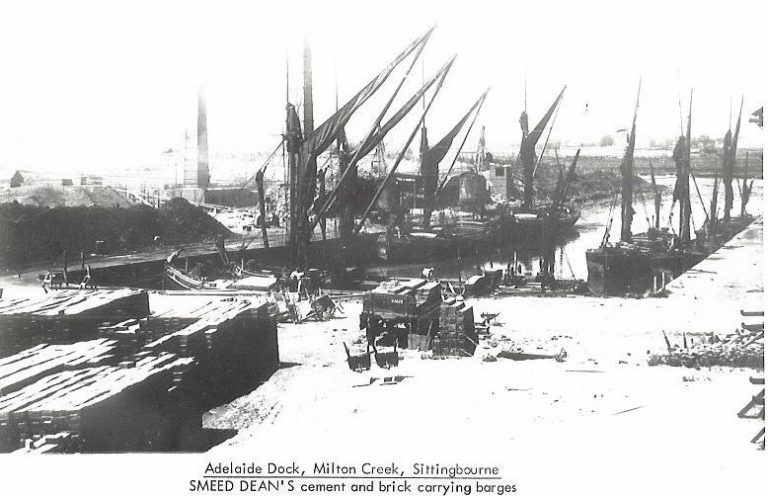 During the 19th century the towns developed as manufacturing centres. The first industries to change the urban landscape were brick and cement manufacturing. Although there were brickfields on both sides of Milton Creek, it was on the Sittingbourne and Murston side that there was the greatest number, especially those of Smeed Dean.

It was also there that the cement mills were found, and rows of houses were built in the east of the town for their workers. The bricks were taken to London by barge and the ash from London fireplaces, an essential ingredient in the brick making process, was brought back. Owners of brickfields were also barge owners and then, increasingly, Milton Creek became a centre for the building of barges, something which particularly benefitted Milton.

At the same time another industry was also developing, paper manufacturing. There had been a small paper mill in Sittingbourne from the early 18th century. It used the fresh water streams which flowed into Milton Creek, and hand-made paper was being made there in the early 19th century.

In the 1860s Edward Lloyd purchased the mill site and larger premises were built, close to Milton Creek, which was used to transport both the finished paper and the coal and straw needed for the process.

In the 1870s Edward Lloyd had purchased the Daily Chronicle newspaper, and the Sittingbourne Mill had the largest paper-making machine in existence at that time. The expansion of the mill led to the building of new roads to the west of Sittingbourne High Street for the workers. The mill was on the boundary between Sittingbourne and Milton and the work-force came from both towns.

The Sittingbourne and Milton Directory of 1908-09 gives an idea of the differences between the two towns. 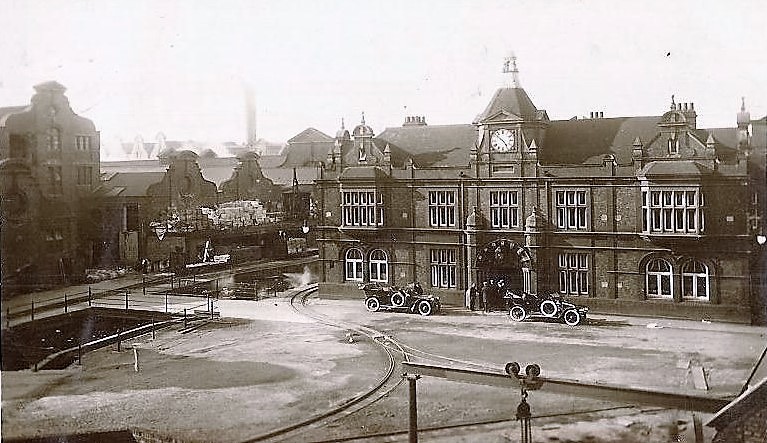 There was, though, a huge difference between the two in terms of small family or one-man businesses. 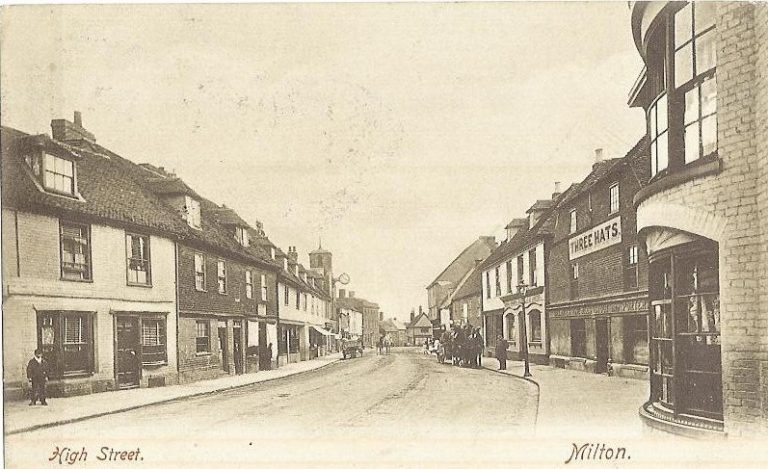 Excluding inns/public houses, there were around 120 business occupations named in the Directory for those living in Milton, including around 30 in Milton High Street.

In contrast, Sittingbourne had around two hundred businesses in the central area of the High Street, East Street and West Street alone and around another 150 in the other streets. One street, William Street, gives an indication of the different types of business, there was a coach builder, a shoemaker, a hairdresser, an oilman, a wardrobe dealer, a painter and two shopkeepers. Shop keeping was the most common type of small business, and most streets in Sittingbourne had at least one shop. 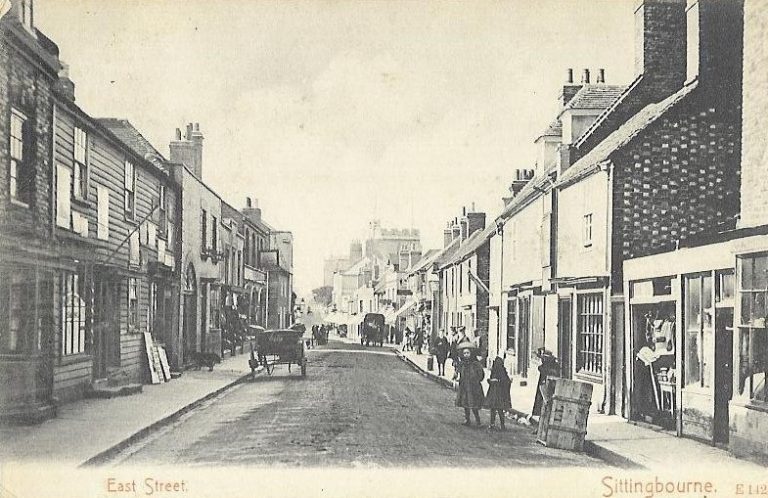 There were nine schools in the two towns, including the County School for Girls, at Brenchley House in Sittingbourne High Street  (Borden Grammar School was in the parish of Borden at that time.)

There were twenty-two places of worship and around thirty social and sports clubs or associations. They included several football and cricket clubs; tennis, cycling and swimming clubs; a bowling club and a homing pigeon society.

The two banks were both in Sittingbourne, as was the library and swimming baths – this was very popular with civilians and troops during the war. In just one week in June 1916 nearly 2,800 attended and it was kept open until 8.00pm in the evening.

The main post office was also found in Sittingbourne, as was the police station and the magistrates’ court. However each town had its own fire brigade, gas works, sewerage treatment works and water works.

When the war started, the two towns were to be united in the fight against Germany, as they became a strategic centre for the war effort. Not only were the local industries essential, but the towns were the gateway to the Isle of Sheppey, which was under military control.

They were also on the edge of the line of defence against invasion, which ran along the Stockbury valley. 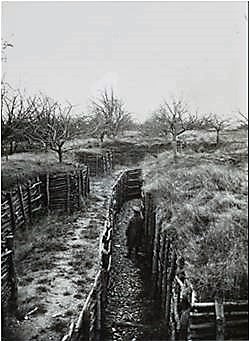