Faversham Stone Chapel known as ‘Our Lady Of Elwerton’ (also Eylwarton). (Postcode ME13 0TB or map Ref TQ991613) You can see it clearly from the road. Just off the A2, the Roman Watling Street, adjacent to the field 100 metres (330 feet) south of the site; after Teynham, as you approach Faversham just west of Ospringe and opposite the Faversham Road. Parking is tricky, but is quite possible; you can park in the lane called Four Oaks Road, just before the chapel, and then it is just a short walk across the field, to a small copse. It’s a lovely shady area, that you can even picnic in.

Our Lady of Elwerton, is managed by English Heritage, and can be visited almost anytime, as it is open ‘any reasonable time during daylight hours’. So just pick a sunny day, and enjoy! Although this article has photos, it’s still much better to see the fabric of the building up close and breath the air of our ancestors. 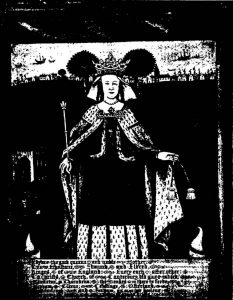 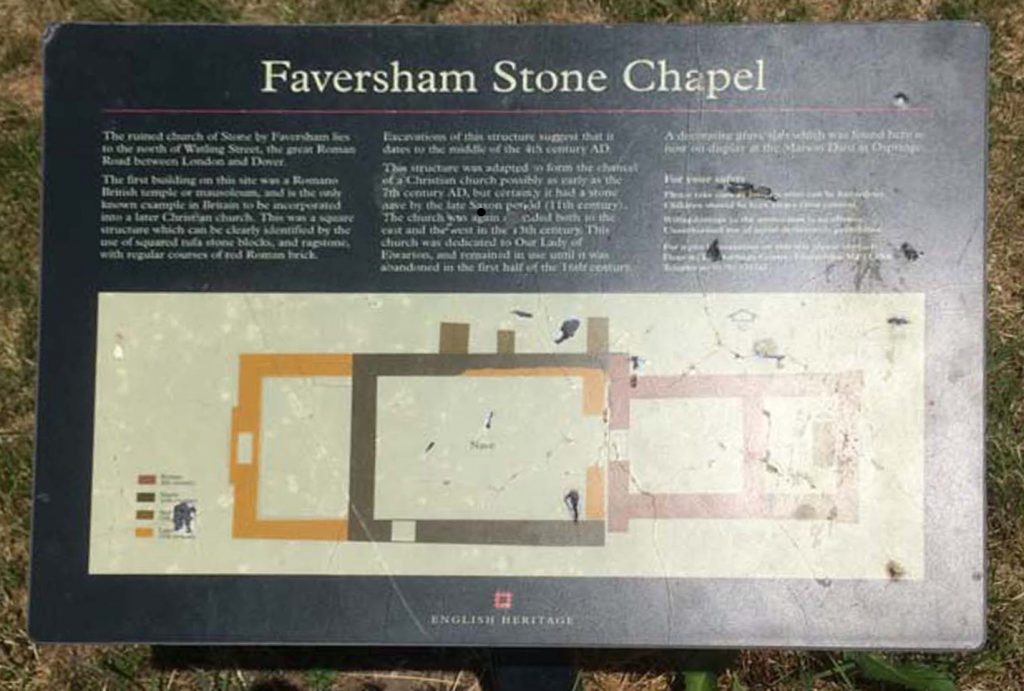 What is physically there?

It is roughly an oblong ruined structure with the two longest sides being approximately 6 metres (17 feet) in length, built on a foundation of very large flints. The highest wall remaining being 2½ meters (8 feet) tall. The derelict building has four distinct phases: Roman, Saxon and Medieval, both early and later phases. The walls are in places 1 metre (3 feet) thick and are constructed of square stone blocks with frequent courses of thin red bricks. The walls were reinforced with external buttresses, several of which remain today, at the north-west and south-west corners of the building. In the main walls, in the Roman part, you can clearly see Roman red brick, and layers of alternate sandstone and tufa. Tufa is formed as lime rich water evaporates, leaving behind a soft and porous calcium carbonate rich rock; so it weighs half as much as a piece of granite the same size. This makes it light and easy to handle.

The original entrance is represented by a gap in the centre of the west wall, with a slab of greensand stone for the original doorsill, still in place. Internally the floor was constructed of ‘opus signinum’ (Roman concrete made with crushed tiles) and the walls were believed to be previously decorated with red painted plaster. There also appears to be an alter structure at the east end in the later Medieval structure.

A Roman Mausoleum or Temple?

The Roman building was excavated during the 19th century and again in the 1960s and 1970s. Those who have analysed the building have interpreted it as a Romano-British mausoleum, a tomb standing above ground. Mausolea were constructed to contain and mark high-status burials. They often served as family tombs, in which some form of ceremony could be performed when a new burial was placed in the monument. They are usually located within cemeteries but may also be found singly, associated with villas or in small groups. The tradition of building mausolea in Britain began in the early 2nd century AD and continued until at least the 4th century. It has been suggested that the building was a Romano-British temple or small Christian shrine.

Another theory is that that the Roman settlement of Durolevum was situated on the outskirts of Faversham, and that this structure is all that survives above ground of that settlement. Excavations have revealed a further Roman building about 11 metres (36 feet), to the north-west.

The middle section of the building is believed to be late Saxon, eleventh Century in date, which made use of the surviving Roman walls. What is intriguing is that, in the centre of the structure, there are two sets of walls that mirror each other. The English Heritage board on the site advises that these abutting walls are thirteenth century. Were they replacements for the Roman walls that may have been there previously, or retaining walls to help keep the building stable? 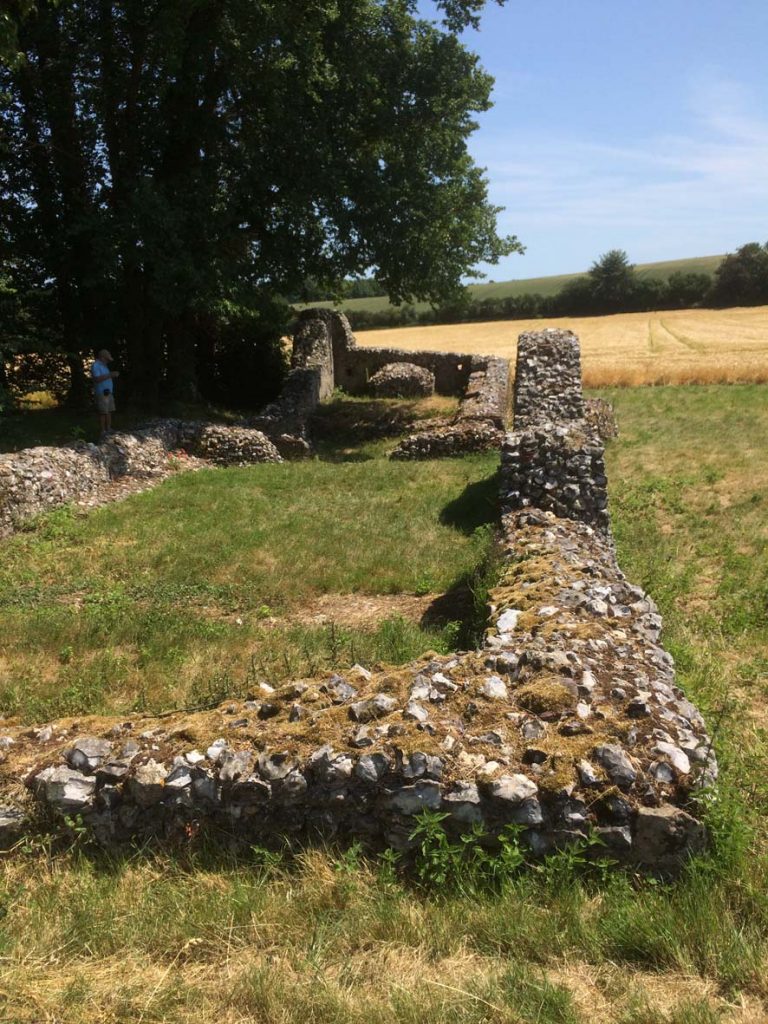 The medieval part is mostly flint. The east end of the building is the medieval chapel, which also made use of the surviving Roman walls. In Edward Hasted’s book ‘The History and Topography Survey of the County of Kent’, he advises that in the year 1227 in the reign of King Henry III, Simon Langton was the Archdeacon of Canterbury and with the consent of his brother Stephen, the Archbishop, it was conveyed to the monks of Christchurch with all the tithes of ‘ the manor of Eylwarton, lying within the chapelry of Stone, in Tenham parish’.

And William Henry Ireland’s book of ‘A new and complete history of the county of Kent Vol 2’, which is based much of the work of Hasted, advises that the Manor of Elwerton was written in the Domesday book as ‘Ernolton’ and in ancient deeds as ‘Eylwartone’, whose name it was given by King Edmund, son of Queen Ediva (who lived and died in the tenth century), to the monks of Christchurch in Canterbury for the use of the refectory. That donation was confirmed to them also at the time of King Stephen and the Archbishop Theobald.

In 1227, during the reign of Henry III, the chapel of Stone passed under the name of ‘Dominical’ or ‘Demesne’ tithes. This Manor continued in the same state until the dissolution of the Priory under Henry VIII. The family of the Clarke’s held it in the reigns of Elizabeth and James I and the Sidney’s under Charles II. After which it was held by the Tenison’s; Anne, widow of Dr Edward Tenison Bishop of Ossory in Ireland, having possessed it at her death in 1750. Her will left her interest after the death of Margaret, wife of Peter St Eloy, her daughter, to her grandson, Thomas Tenison Esq. In 1762, its ownership moved to Samuel and William Smith of William Smith, of London, merchants who in 1774 assigned their interest in the property to John Waller, a gentleman of Faversham.

In 1821, there were ten dwellings in the parish of Stone and when the last census of the population was taken, the number of inhabitants were as follows: males 41, females 34, making a total of 75 souls.

Other than the interest in the building’s structure over several centuries and the potential to use the copse behind it as a picnic spot…it might just be one of the first Christian churches in England. Pope Gregory I (r.590–604) dispatched two groups of monks from Rome in the spring of 596 and they arrived in Kent the following year; and a second reinforcing group was sent in the summer of 601, after the pope had received a report of the initial group’s favourable reception. In AD 601 Pope Gregory directed St Augustine not to destroy Pagan buildings, but to adapt them for Christian use. King Ethelbert of Kent allowed St Augustine to build and repair churches in the area. It is tantalising to think that this little ruined church at Stone is one of those churches.

Let us know what you think when you visit: Contact us