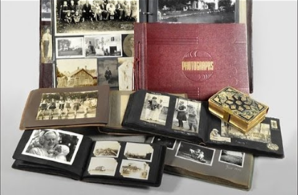 Help us bring this information into the future of the digital world.

HRGS holds a treasure trove of valuable research from prehistory up to the present day. This includes photographs, books, diaries, research documents, archaeological artefacts, and maps, amongst others.

These are stored in a variety of methods and locations including boxes, computer, CDs, and folders.

We now have, thanks to the local branch of East Kent Freemasons, purchased the software to catalogue all these documents to enable researchers to find records and photos more effectively in the future.

The current system relies upon memory and local knowledge to determine where a particular item is stored.

HRGS are embarking on its Digitalization Project to review its holdings and research with an objective to catalogue these holdings to enable more local people have access to these photographs and maps and things from our past.

We need your help…

What do HRGS need to catalogue?

1000s of photographs accumulated from various research projects and donations.

Photographs, documentation and artefacts from various research projects including:

We have collected a wide selection of artefacts, from archaeological digs including coins, pottery and ironwork from:

Rose Hill – at Bobbing, a Georgian House demolished in the 1970s.

Skills you may already have that could help:

Identifying photographs – help us identify places we have photos of.

Sorting and labelling – if you enjoy admin maybe you could help sort photographs, books, documents and artefacts.

Photography – maps, documents and artefacts need to be photographed.

Scanning – help lay out maps and  photographs that need to be turned into a digital image.

Cataloguing – typing up information onto our database. This can include anything from documents, describing artefacts and photographs, inputting written and typed information.

Checking – do you have a good eye for detail, and could you review documents or lists that have been prepared.

The project is based at the Heritage Hub, The Forum, Sittingbourne ME10 3DL.

for sponsoring this project